Kafka’s architecture is very simple, which can result in better performance and throughput in some systems. Every topic in Kafka is like a simple log file. When a producer publishes a message, the Kafka server appends it to the end of the log file for its given topic. The server also assigns an offset, which is a number used to permanently identify each message. As the number of messages grows, the value of each offset increases; for example if the producer publishes three messages the first one might get an offset of 1, the second an offset of 2, and the third an offset of 3.

When the Kafka consumer first starts, it will send a pull request to the server, asking to retrieve any messages for a particular topic with an offset value higher than 0. The server will check the log file for that topic and return the three new messages. The consumer will process the messages, then send a request for messages with an offset higher than 3, and so on.

In Kafka, the client is responsible for remembering the offset count and retrieving messages.The Kafka server doesn’t track or manage message consumption. By default, a Kafka server will keep a message for seven days (to change in log.retention.hours=168 in server.properties). A background thread in the server checks and deletes messages that are seven days or older. A consumer can access messages as long as they are on the server. It can read a message multiple times, and even read messages in reverse order of receipt. But if the consumer fails to retrieve the message before the seven days are up, it will miss that message.

Kafka architecture can be extended to integrate with data sources and data ingestion platform. Kafka connect is a set of certified connectors provided by Confluent that extend Kafka to communicate from various database and messaging platform vendors. 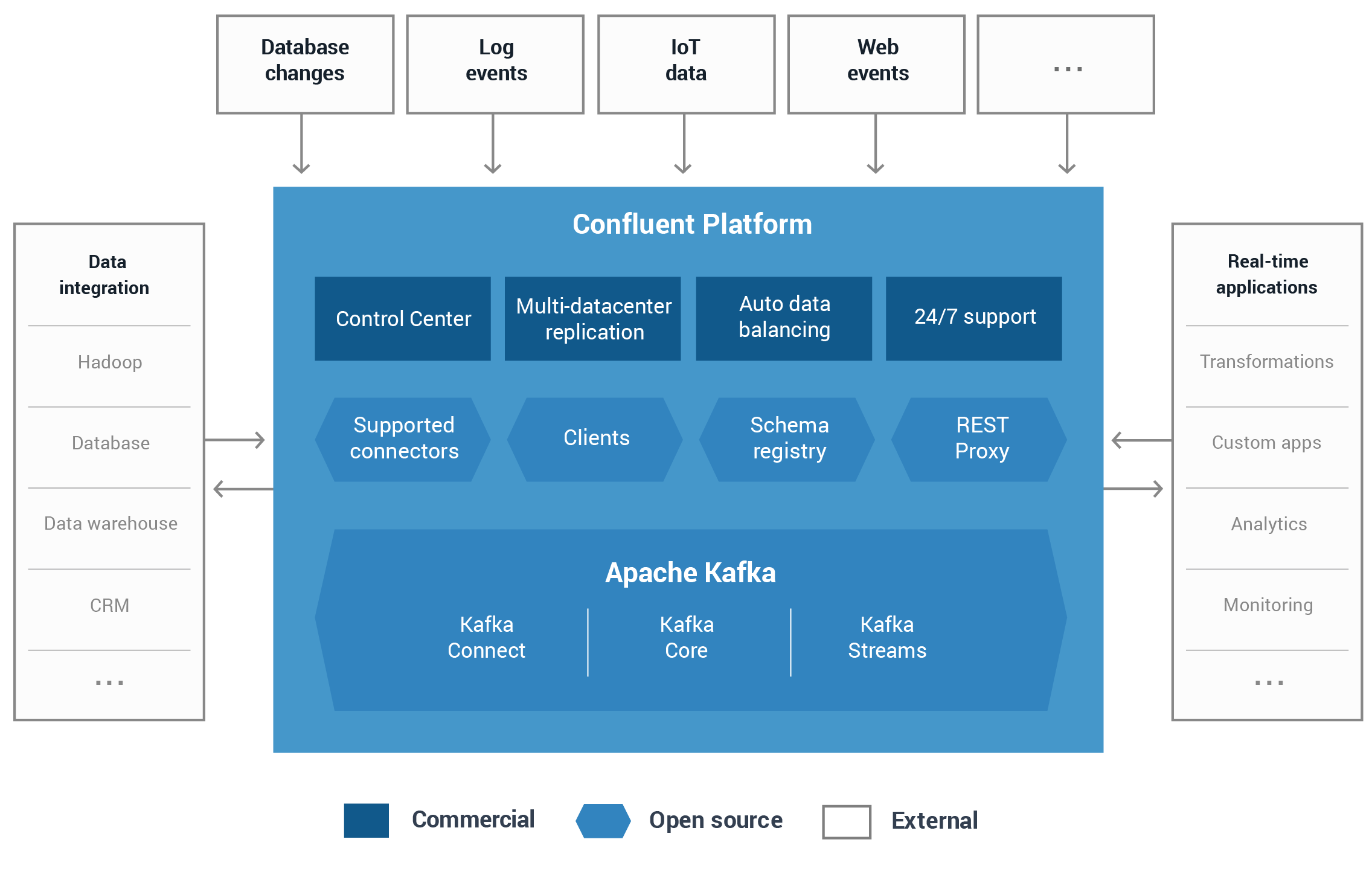 Kafka Connect is a framework included in Apache Kafka that integrates Kafka with other systems. Its purpose is to make it easy to add new systems to your scalable and secure stream data pipelines.

To copy data between Kafka and another system, users instantiate Kafka Connectors for the systems they want to pull data from or push data to. Source Connectors import data from another system (e.g. a relational database into Kafka) and Sink Connectors export data (e.g. the contents of a Kafka topic to an HDFS file).

We configure the producer by creating an object from the java.util.Propertiesclass and setting its properties. The ProducerConfig class defines all the different properties available, but Kafka’s default values are sufficient for most uses. For the default config we only need to set three mandatory properties:

BOOTSTRAP_SERVERS_CONFIG (bootstrap.servers) sets a list of host:port pairs used for establishing the initial connections to the Kakfa cluster in the host1:port1,host2:port2,... format. Even if we have more than one broker in our Kafka cluster, we only need to specify the value of the first broker’s host:port. The Kafka client will use this value to make a discover call on the broker, which will return a list of all the brokers in the cluster. It’s a good idea to specify more than one broker in the BOOTSTRAP_SERVERS_CONFIG, so that if that first broker is down the client will be able to try other brokers.

The Kafka server expects messages in byte[] key, byte[] value format. Rather than converting every key and value, Kafka’s client-side library permits us to use friendlier types like String and int for sending messages. The library will convert these to the appropriate type. For example, the sample app doesn’t have a message-specific key, so we’ll use null for the key. For the value we’ll use a String, which is the data entered by the user on the console.

To configure the message key, we set a value of KEY_SERIALIZER_CLASS_CONFIGon the org.apache.kafka.common.serialization.ByteArraySerializer. This works because null doesn’t need to be converted into byte[]. For the message value, we set VALUE_SERIALIZER_CLASS_CONFIG on the org.apache.kafka.common.serialization.StringSerializer, because that class knows how to convert a String into a byte[].

Similar to StringSerializer, Kafka provides serializers for other primitives such as int and long. In order to use a custom object for our key or value, we would need to create a class implementing org.apache.kafka.common.serialization.Serializer. We could then add logic to serialize the class into byte[]. We would also have to use a corresponding deserializer in our consumer code.

Whenever a new message is published to the topic, it will read that message and print it to the console. The consumer code is quite similar to the producer code. We start by creating an object of java.util.Properties, setting its consumer-specific properties, and then using it to create a new object of KafkaConsumer. The ConsumerConfig class defines all the properties that we can set. There are just four mandatory properties:

Just as we did for the producer class, we’ll use BOOTSTRAP_SERVERS_CONFIG to configure the host/port pairs for the consumer class. This config lets us establish the initial connections to the Kakfa cluster in the host1:port1,host2:port2,...format.

As I previously noted, the Kafka server expects messages in byte[] key and byte[] value formats, and has its own implementation for serializing different types into byte[]. Just as we did with the producer, on the consumer side we’ll have to use a custom deserializer to convert byte[] back into the appropriate type.

If you then started two consumers, the server might assign partitions 1 and 2 to the first consumer, and partition 3 to the second consumer. Each consumer would read only from its assigned partitions. You can see the Demo topic configured for three partitions in Figure 1.

To expand the scenario, imagine a Kafka cluster with two brokers, housed in two machines. When you partitioned the demo topic, you would configure it to have two partitions and two replicas. For this type of configuration, the Kafka server would assign the two partitions to the two brokers in your cluster. Each broker would be the leader for one of the partitions.

Consider the benefits of partitioning a Kafka-based messaging system:

The producer is responsible for deciding what partition a message will go to. The producer has two options for controlling this assignment:

The Kafka server guarantees that a partition is assigned to only one consumer, thereby guaranteeing the order of message consumption. You can manually assign a partition or have it assigned automatically.

If your business logic demands more control, then you’ll need to manually assign partitions. In this case you would use KafkaConsumer.assign(<listOfPartitions>) to pass a list of partitions that each consumer was interested in to the Kakfa server.

Having partitions assigned automatically is the default and most common choice. In this case, the Kafka server will assign a partition to each consumer, and will reassign partitions to scale for new consumers.

Being able to partition a single topic into multiple parts is one essential to Kafka’s scalability. Partitioning lets you scale your messaging infrastructure horizontally while also maintaining order within each partition. Next we’ll look at how Kafka uses message offsets to track and manage complex messaging scenarios.

Whenever a producer publishes a message, the Kafka server assigns an offset to that message. A consumer is able to control which messages it wants to consume by setting or resetting the message offset. When developing a consumer you have two options for managing the offset: automatic and manual.

When you start a consumer in the Kafka client, it will read the value of your ConsumerConfig.AUTO_OFFSET_RESET_CONFIG(auto.offset.reset)configuration. If that config is set to earliest then the consumer will start with the smallest offset available for the topic. In its first request to Kafka, the consumer will say: give me all the messages in this partition with an offset greater than the smallest one available. It will also specify a batch size. The Kafka server will return it all the matching messages in batches of the specified size.

In order to ensure message persistence, Kafka uses two types of offset: The current offset is used to track messages consumed when the consumer is working normally. The committed offset also tracks the last message offset, but it sends that information to the Kafka server for persistent storage.

If the consumer goes down or is taken down for some reason, it can query the Kafka server for the last committed offset and resume message consumption as if no time has been lost. For its part, the Kafka broker stores this information in a topic called __consumer_offsets. This data is replicated to multiple brokers so that the broker won’t ever lose the offsets.

You have a choice about how often to commit offset data. If you commit frequently, you’ll take a performance penalty. On the other hand, if the consumer does go down you will have fewer messages to reprocess and consume. Your other option is to commit less frequently (for better performance), but reprocess more messages in case of failure. In either case the consumer has two options for committing the offset:

Three use cases for manual offsets

Let’s consider three use cases where you wouldn’t want to use Kafka’s default offset management infrastructure. Instead, you’ll manually decide what message to to start from.

Traditional messaging use cases can be divided into two main types: point to point and publish-subscribe. In a point-to-point scenario, one consumer consumes one message. When a message relays a bank transaction, only one consumer should respond by updating the bank account. In a publish-subscribescenario, multiple consumers will consume a single message but respond differently to it. When a web server goes down, you want the alert to go to consumers programmed to respond in different ways.

Early use cases for big data message systems called for batch processing, such as running a nightly ETL process or moving data from the RDBMS to a NoSQL datastore at regular intervals. In the past few years the demand for realtime processing has increased, especially for fraud detection and emergency response systems. Kafka was built for just these types of realtime scenarios.

Kafka is a great open source product but it does have some limitations; for instance you can’t query data from inside a topic before it reaches its destination, or replicate data across multiple geographically distributed clusters. You could combine MapR Streams (a commercial product) with the Kafka API for these and other more complex publish-subscribe scenarios.