AngularJS is an open source web application framework which is maintained by Google and a community of passionate developers. It helps you in adding dynamic views in your web applications. With Model-View-Whatever (MVW) architecture and components which are commonly used in Rich Internet Applications, it has become a preferred framework for creation of interactive web applications and data-driven apps. AngularJS is a tool-set which interacts with the HTML. Any back end platform such as Node.js can serve the HTML.

Here is an explanation and full source code for getting started.

In Angular, the view is a projection of the model through the HTML template. This means that whenever the model changes, Angular refreshes the appropriate binding points, which updates the view.

The view component is constructed by Angular from this template:

The data model (a simple array of phones in object literal notation) is now instantiated within the PhoneListCtrl controller. The controller is simply a constructor function that takes a $scope parameter:

The concept of a scope in Angular is crucial. A scope can be seen as the glue which allows the template, model and controller to work together. Angular uses scopes, along with the information contained in the template, data model, and controller, to keep models and views separate, but in sync. Any changes made to the model are reflected in the view; any changes that occur in the view are reflected in the model. 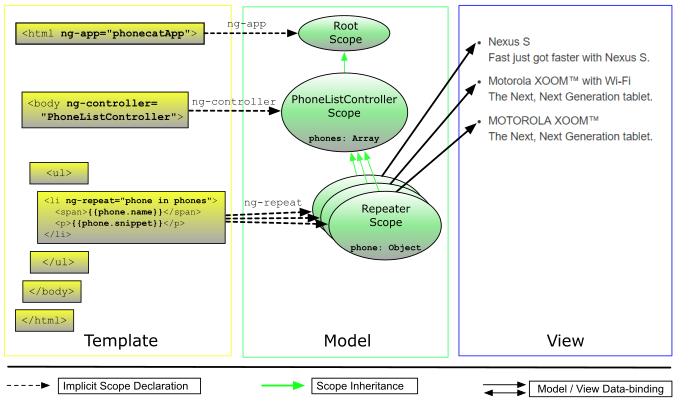 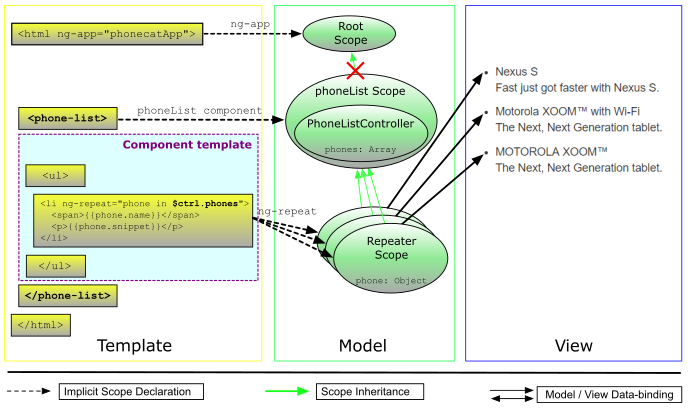 Creating a new model property, wiring it together with the repeater.

We set orderProp to 'age' in the controller. So the binding works in the direction from our model to the UI. Angular creates a two way data-binding between the select element and the orderProp model. orderProp is then used as the input for the orderBy filter.

This fetches a larger dataset from our server using one of Angular’s built-in services called $http. We will use Angular’s dependency injection (DI) to provide the service to the PhoneListCtrl controller. Consider the JSON file as the data:

Use Angular’s $http service in our controller to make an HTTP request to your web server to fetch the data in the app/phones/phones.json file. $http is just one of several built-in Angular services that handle common operations in web apps. Angular injects these services for you where you need them.

The $http service returns a promise object with a success method. We call this method to handle the asynchronous response and assign the phone data to the scope controlled by this controller, as a model called phones. Notice that Angular detected the json response and parsed it for us!

To use a service in Angular, you simply declare the names of the dependencies you need as arguments to the controller’s constructor function, as follows:

Angular’s dependency injector provides services to your controller when the controller is being constructed. 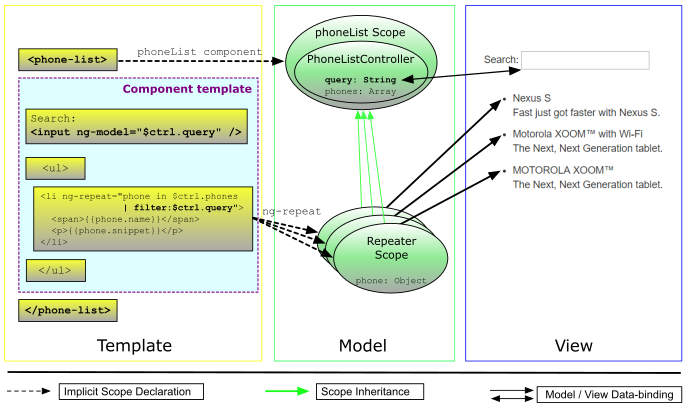 As a naming convention, Angular’s built-in services, Scope methods and a few other Angular APIs have a $ prefix in front of the name.

The $ prefix is there to namespace Angular-provided services. To prevent collisions it’s best to avoid naming your services and models anything that begins with a $.

If you inspect a Scope, you may also notice some properties that begin with $$. These properties are considered private, and should not be accessed or modified.

Create multiple views by adding routing, using an Angular module called ‘ngRoute’. E.g navigate to app/index.html, you are redirected to app/index.html/#/phones and the phone list appears in the browser.

Application routes in Angular are declared via the $routeProvider, which is the provider of the $route service. This service makes it easy to wire together controllers, view templates, and the current URL location in the browser. Using this feature, we can implement deep linking, which lets us utilize the browser’s history (back and forward navigation) and bookmarks.

Custom output filters to customise display of output text or format.The syntax for using filters in Angular templates is as follows:

Some of the built-in Angular filters

Create a custom filter to convert text strings into glyphs: ✓ for “true”, and ✘ for “false” and register your custom filter with this Angular module: app/js/filters.js:

Include the app/js/filters.js file, we need to include this file in our layout template.app/index.html:

Add the filter expression in the template HTMLapp/partials/phone-detail.html:

AngularJS directives allow the developer to specify custom and reusable HTML-like elements and attributes that define data bindings and the behavior of presentation components.

Some of the most commonly used directives are:

ng-app
Declares the root element of an AngularJS application, under which directives can be used to declare bindings and define behavior.

There are 3 important things that happen during the app bootstrap:

ng-bind
Sets the text of a DOM element to the value of an expression. For example, will display the value of ‘name’ inside the span element. Any changes to the variable ‘name’ in the application’s scope are reflected instantly in the DOM.

ng-model
Similar to ng-bind, but establishes a two-way data binding between the view and the scope.

ng-repeat
Instantiate an element once per item from a collection.

ng-show & ng-hide
Conditionally show or hide an element, depending on the value of a boolean expression. Show and hide is achieved by setting the CSS display style.

ng-switch
Conditionally instantiate one template from a set of choices, depending on the value of a selection expression.

ng-view
The base directive responsible for handling routes that resolve JSON before rendering templates driven by specified controllers.

ng-if
Basic if statement directive which allow to show the following element if the conditions are true. When the condition is false, the element is removed from the DOM. When true, a clone of the compiled element is re-inserted

ng-aria
A module for accessibility support of common ARIA attributes.

Specifies source url using angular expression. Using Angular markup like {{hash}} in a src attribute doesn’t work right: The browser will fetch from the URL with the literal text {{hash}} until Angular replaces the expression inside {{hash}}.Any string which can contain {{}} markup